There are 3 causes of compressor failures as follows. 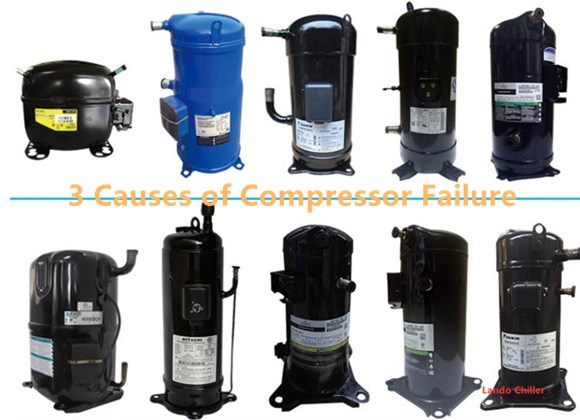 Liquid refrigerant or lubricating oil with the gas into the compressor cylinder when the suction valve damage phenomenon, as well as into the cylinder after the exhaust process is not quickly discharged, in the piston near the upper stop when the piston is compressed and the phenomenon of instantaneous high hydraulic pressure is usually called liquid shock.

The liquid attack can cause damage to the compressed parts (such as valves, pistons, connecting rods, crankshafts, piston pins, etc.) in a very short time, which is a fatal killer of reciprocating compressors. Reduce or avoid the liquid into the cylinder can prevent the occurrence of liquid shock, so the liquid shock is completely avoidable.

A compressor is a machine that compresses the gas. Usually, the piston compresses the gas 1450 times per minute (half-seal compressor) or 2900 times (full-seal compressor), that is, the time to complete a suction or discharge process is 0.02 seconds or even shorter. The size of the suction and discharge apertures on the valve plate and the elasticity and strength of the suction and discharge valves are designed for gas flow. From the point of view of the valve plate force, the impact force generated by the gas flow is relatively uniform.

The compression stroke takes about 0.02 seconds, and the venting process will be even shorter. The velocity and momentum of the droplets of liquid in the cylinder that must be expelled from the exhaust orifice in such a short period of time are significant. The exhaust valve plate is the same as the suction valve plate, except that the exhaust valve plate is supported by a limit plate and a spring plate that does not break easily. When the impact is serious, the limit plate will also be deformed and buckled.

Obviously, the liquid that can cause the compressor liquid strike is no more than the following sources.

1) back to the liquid, that is, from the evaporator flow back to the compressor of liquid refrigerant or lubricating oil.

2) foam when starting with liquid.

3) too much lubricating oil in the compressor.

Systems utilizing hot gas frost melting are prone to liquid return. Whether a four-way valve is used for water chiller system operation or a hot gas bypass valve is used for refrigeration operation, the hot gas melting frost creates a large amount of liquid in the evaporator, which can return to the compressor at the beginning of subsequent refrigeration runs.

Returning fluid will not only cause fluid strikes but also dilute the lubricant causing wear. The load and current of the motor will increase greatly when it wears out, which will cause motor failure over time. For water chiller systems where the liquid return is difficult to avoid, installing gas-liquid separators and using evacuation shutdown control can effectively stop or reduce the harm of liquid return.

(2) Starting with a liquid

In addition, if the compressor is outdoors, when the weather is cold or at night, the temperature is often lower than the evaporator indoors, the pressure in the crankcase is also low, and the refrigerant can easily be condensed and enter the lubricating oil after migrating to the compressor.

After a long shutdown (e.g., a winter), heating the lubricating oil for a few hours or a dozen hours before starting can evaporate most of the refrigerant in the lubricating oil, which greatly reduces the possibility of liquid shock when starting with liquid and also reduces the hazards caused by refrigerant flushing. In practice, however, it is difficult to maintain power to the heater after shutdown or to power the heater for more than ten hours before start-up. As a result, the actual effectiveness of the crankcase heater can be greatly reduced.

Of course, by improving the compressor structure, refrigerant migration can be stopped and the level of lubricant foaming can be slowed down. By improving the oil return path in the return air-cooled compressor, adding a shut-off (oil return pump, etc.) to the channel between the motor cavity and the crankcase migration, the path can be cut off after shutdown and the refrigerant cannot enter the crankcase; reducing the channel cross-section between the air inlet and the crankcase can slow down the crankcase pressure drop at start-up, thus controlling the degree of blistering and the amount of foam entering the cylinder.

Semi-hermetic compressors usually have an oil sight glass to observe the oil level. The oil level is higher than the range of oil sight glass, which means too much oil. The oil level is too high, high-speed rotation of the crankshaft and connecting rod head may frequently hit the oil surface, causing a large amount of splashing lubricant. Once the splashing lubricant into the air intake, brought into the cylinder, it may cause a liquid strike.

When large water chiller systems are installed and commissioned, they often need to be properly replenished with lubricant. However, for systems with poor oil return, it is important to carefully search for the root cause of the impact on oil return, and it is dangerous to simply replenish the lubricant. Even if the oil level is temporarily low, it is important to be aware of the dangers that can be caused by a sudden, large return of lubricant (e.g. after frosting). Fluid strikes caused by lubricant are not uncommon. 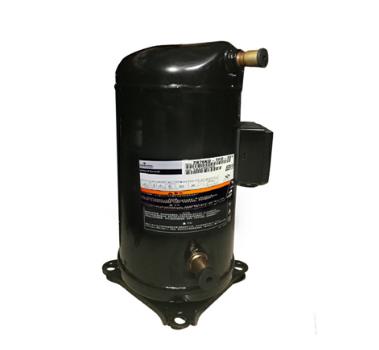 The compressor is a high-speed operation of complex machines, to ensure that the compressor crankshaft, bearings, connecting rods, pistons, and other moving parts of adequate lubrication are to maintain the basic requirements of the normal operation of the machine. For this reason, compressor manufacturers require the use of specified grades of lubricating oil and require regular inspection of the oil level and color. However, due to negligence in the design, construction, and maintenance of refrigeration systems, it is common for compressors to suffer from insufficient lubrication of moving parts due to lack of oil, oil coking and deterioration, dilution of return fluid, refrigerant flushing, and use of poor quality lubricants. Insufficient lubrication will cause bearing surface wear or scratches, serious will cause holding shaft, piston stuck in the cylinder and the resulting bending of the connecting rod, fracture accident.

Lack of oil is easy to identify one of the compressor failures, compressor lack of oil when the oil in the crankcase is very little or even no lubricant.

The compressor is a special gas pump, a large amount of refrigerant gas in the discharge at the same time also entrapped away a small part of the lubricant (known as running oil or run oil). Compressor oil run-off is unavoidable, but the rate of oil run-off varies. A semi-sealed piston compressor has about 2-3% oil in its discharge, while a scroll compressor has 0.5-1%. For a 6-cylinder compressor with a displacement of 100m3/hr and a crankcase reservoir of 6 liters, 3% oil run means about 0.3-0.8 liters/minute of oil run, or a compressor running without oil return for more than 10 minutes.

There are two ways to return oil to the compressor.

Oil separator installed in the compressor discharge line generally can separate out 50-95% of the running oil, oil return effect is good, fast, greatly reducing the amount of oil into the system pipeline, thus effectively extending the running time without oil return. The pipeline is particularly long cold storage refrigeration system, full liquid ice system, and very low-temperature freeze-drying equipment, etc., after the start of ten minutes or even tens of minutes without oil return or oil return is very small is not uncommon, the poorly designed system will appear compressor oil pressure is too low and shut down.

When an internal oil return problem occurs, the compressor oil level can be observed to drop continuously until the oil pressure safety device is actuated. The oil level in the crankcase is quickly restored after the compressor is shut down. The root cause of the internal oil return problem in cylinder leakage and the worn piston assembly should be replaced promptly.

Wear caused by a lack of oil in a compressor is generally more uniform. If there is little or no oil, the bearing surfaces will rub violently and the temperature will rise rapidly within seconds. If the motor is powerful enough, the crankshaft will continue to rotate and the crankshaft and bearing surfaces will be worn or scratched, otherwise, the crankshaft will be held by the bearings and stop rotating. The reciprocating motion of the piston in the cylinder is the same, lack of oil will cause wear or scratching, and in severe cases, the piston will be stuck in the cylinder and cannot move.

One of the major hazards of fluid return, a common system problem, is the dilution of the lubricant. The diluted lubricant reaches the friction surface with low viscosity and cannot form a thick enough protective oil film, which will cause wear and tear over time. When the amount of return fluid is relatively large, the lubricant will be very thin, not only can not play a lubricating role, but also dissolve and flush the original oil film, causing refrigerant flushing.

For various reasons, including the start-up phase of the compressor, the temperature of the unlubricated friction surfaces rises rapidly, and the lubricant begins to break down above 175°.

It is a typical vicious circle, many malicious accidents including connecting rod holding shaft and piston stuck cylinder are related to this vicious circle.

Inadequate lubrication and oil deficiency can be seen in disassembled compressors. The lack of oil is generally manifested as large, relatively uniform surface damage and high temperatures, while the lack of lubrication is more in some specific parts of the wear, scratches, and high temperatures, such as the bearing surface away from the oil pump.

Oil shortage will cause serious lubrication deficiency, the root cause of oil shortage does not lie in how much and how fast the compressor runs oil, but in the poor return of oil to the system. Installing an oil separator can quickly return oil and prolong the running time of the compressor without oil return.

The evaporator and return lines must be designed with oil return in mind. Maintenance measures such as avoiding frequent start-ups, regular defrosting, timely replenishment of the refrigerant, and timely replacement of worn piston assemblies also contribute to oil return.

“The root cause of oil shortage lies in the system. Therefore, only replacing the compressor or certain accessories cannot solve the root of the oil shortage problem.