For the above main 3 refrigeration system piping, there are still other branches, which are dispensable based on different systems. Such as thermal expansion valve external balance pipe, hot gas bypass pipe, spray cooling pipe, hot vaporization frost pipe, parallel system of oil balance pipe, gas balance pipe and so on.

The article is to analyze the basic design of the three-section main pipeline, which is indispensable to the water chiller refrigeration system. Basically applicable to a variety of water cooling systems and heat pumps using freon vapor compression refrigeration systems.

The suction line is from the outlet of the evaporator to the compressor. The medium flowing in the pipe may include refrigerant gas, refrigerant liquid and lubricating oil. The basic principles of the design the suction line are as follows:

Return Oil, depending on the flow rate of the medium to bring the lubricating oil back to the compressor;

Avoid the compressor stops when the return of liquid caused by liquid start;

Minimize the pressure drop, reduce the impact on system efficiency;

Minimize the transmission of compressor vibration;

The effect of gas-liquid oil separation;

The principles for determining the suction line diameter are as follows:

The flow velocity of refrigerant is not less than 5M / s in ascending pipeline, and the designed flow velocity is more than 8M / S, which is slightly different according to the viscosity of lubricating oil used

The flow rate of refrigerant in horizontal or descending pipes shall not be less than 3M / s;

The maximum flow rate of the suction line shall not exceed 20m / s;

The pressure drop from the suction line shall not exceed 20 KPA;

The pressure drop and vibration of the refrigerant system can be reduced by designing the pipe diameter as large as possible to meet the flow velocity of oil. 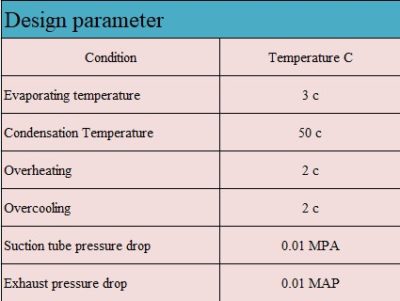 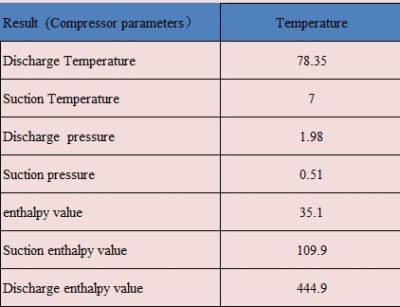 According to the given information on the flow chart, the enthalpy of each point can be calculated. The mass flow can be obtained by dividing the difference of the enthalpy by the refrigerating capacity of the cooling system. The figure below is the calculation result of our special software. 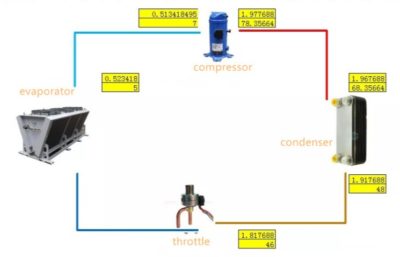 Finally, divide the volume flow rate by the cross-sectional area under different pipe diameters, then you can get the 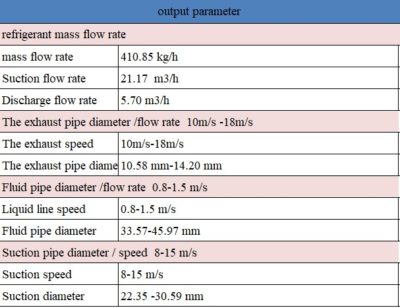 The total pressure drop P on the suction pipe includes three aspects, the resistance along the pipe is caused by the friction of the pipe wall in the flow of fluid, and the pressure drop caused by the accessories installed in the pipe, such as the suction filter, angle valve, four-way reversing valve, etc. Finally, there is the effect of gravity due to the difference in altitude.

In general, the pressure drop of the annex can be determined by the data calibrated by the manufacturer of the annex. The refrigerant flowing in the suction line is a gaseous state, and the effect of gravity is basically negligible Resistance along the way can also be roughly determined by empirical estimates. The theoretical pressure drop due to resistance in three respects can be calculated as follows: 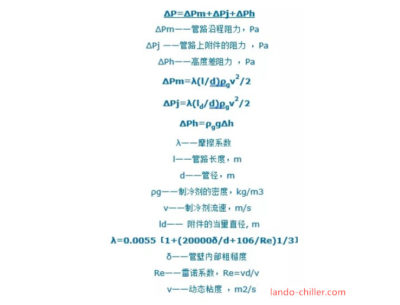 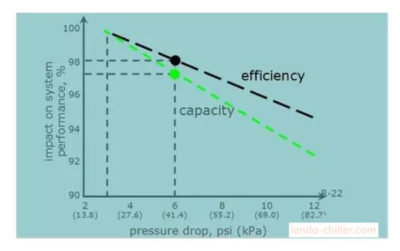 As shown in the diagram below, the Abscissa is the cooling capacity of the refrigeration system, the ordinate is the flow rate of the refrigerant in the pipeline, and the reasonable flow rate is assumed to be in the range of 5 ~ 20 M / S. Different diameters correspond to different refrigerating capacities and can be selected according to the reasonable range given in the diagram.

For example, suppose the capacity of a refrigeration system varies from 5 kW to 20 kW. Note: The capacity varies depending on the allowable operating range of the compressor, the design operating conditions of the system and the actual operating conditions For example, for the T1 operating range in China, the values taken are the minimum and maximum possible refrigerating capacities, which represent the minimum and maximum possible refrigerant flows.

When the refrigerating capacity of the system is 5kW, the diameters of the tubes that can be selected are 22,28,35 and 42 mm respectively in the reasonable flow rate range. These diameters can meet the requirements of carrying oil and avoiding excessive vibration under the 5kW refrigerating capacity. The system in 20kW refrigeration capacity. can choose the diameter of 42,67 mm and larger pipe diameter, so we can choose the entire refrigeration capacity of the system in the scope of only 42 mm pipe diameter, which is painted red pipe diameter. It can not only meet the minimum refrigerant flow in the case of oil recovery. but also not in the case of maximum refrigerant flow.
because the flow rate is too fast to cause vibration problems.

If there is more than one pipe diameter available within the range of capabilities, it is generally recommended to choose a slightly larger pipe diameter in order to improve efficiency.

If the cooling capacity range of the refrigerant system in the previous example is not 5 ~ 20kW, but much larger, say 3 ~ 20kW, we would find that there is no pipe diameter to choose from. In this case, we recommend the design of the double-risers. The schematic diagram is as follows: 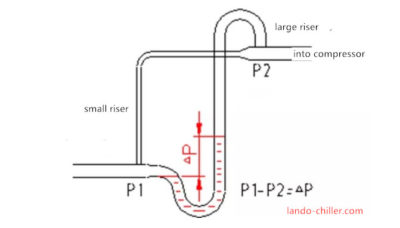 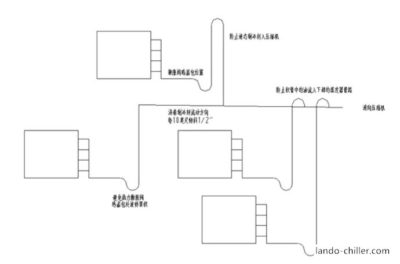 In principle, the layout of the suction line as shown in the following figure, there are two factors to be considered, to prevent return liquid and facilitate return liquid, Basically, the common design scheme is returned liquid bend again.

The general evaporator itself in order to prevent the start and return of liquid with liquid, heat exchanger design will try to let the outlet above the entrance, the general exit open at the top of the heat exchanger The utility model has the function of preventing the return liquid during operation and the gravity migration of the liquid refrigerant during shutdown. The design of the cooling fan for much domestic cold storage or the design of the aluminum row pipeline does not have such a design, even on the contrary, it is very easy to cause the refrigerant liquid migration after the shutdown of the compressor with liquid start-up problems, it is necessary to according to such arrangements as design

In addition, the suction pipe because of the built-in refrigerant state is the most complex and changeable, layout design also consider the following aspects:

To reduce the dead zone of the pipeline, to avoid the retention of excessive oil;

If the rise pipe height drop is large, may consider each interval 2 ~ 4 meters to design the oil return curve;

All external connections to the branch pipe, require the opening position at the top of the pipe, to avoid impurities and lubricating oil outflow, or even lead to the Liquid Hammer;

In the application of medium and low temperature, it is necessary to keep heat to avoid condensation water and ineffective overheating

In the part near the compressor, the pipeline needs to consider the 3D direction flexible design, reduces the compressor external vibration transmission;

The exhaust pipe of the compressor is connected with the exhaust pipe of the compressor and the inlet of the condenser. In most applications, the viscosity of lubricating oil under high temperature and high pressure is relatively small, and the fluidity is relatively good. Therefore, the design of the exhaust pipe will not particularly consider the oil-bearing aspect. The principle of determining the pipe diameter is mainly to consider the effect of vibration And because most applications compressor is very close to the condenser, with the exception of warm and cold equipment, so the effect of pressure drop can be ignored. The following figure shows the approximate relationship between the viscosity of lubricating oil and the solubility and temperature and pressure of the refrigerant:

The arrangement principle of the exhaust pipe is more important than the determination of the pipe diameter. because the basic function of the built-in back pressure check valve or valve seat is to prevent the reversal after the shutdown of the compressor. if there is no additional check valve installed. Can Not really realize the reverse seal, so there is a possibility that the liquid in the condenser and the lubricating oil in the pipeline. After the compressor shuts down, reverse flow into the compressor chamber. The instant next compressor starts can cause a hydraulic blow or high system pressure or even the possibility of forming a hydraulic hammer. For this reason, the layout of the exhaust pipe should consider how to prevent refrigerant migration after shutdown, as shown in the following diagram, indicating three types of errors and one correct layout method: 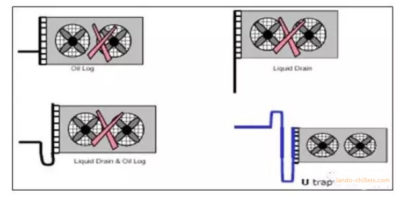 The supply line is connected to the condenser and the evaporator. The medium flowing in the pipe is a liquid state. In most cases, it is high temperature and high pressure.

The lubricating oil and refrigerant in the liquid supply pipeline are both in the liquid state, the solubility is much better than that of the gas refrigerant, so the design of the pipeline does not need to consider the problem of carrying oil. The pressure drop of the feed line is the most important design criterion. The effect of the pressure drop on the undercooling is shown in the following table:

The layout of the liquid supply pipeline itself is also very important. According to the requirements of the throttling mechanism, it is possible to meet the condition of full liquid at the entrance of the throttling mechanism, that is, to have enough supercooling degree. In order to achieve this goal, it is necessary to shorten the distance between the reservoir and the throttle mechanism as far as possible. Unfortunately, at present, the vast majority of the equipment reservoirs are installed at the nearest location from the condenser, and often separate equipment is connected with long pipelines and far from the throttle mechanism, which is easy to cause undercooling and low-pressure alarm in the system Even a series of problems such as piping surge, throttling mechanism squeal, Liquid Hammer, etc. .

A new design scheme is put forward. If the reservoir is more than 10 meters away from the throttling mechanism, it is suggested to design a liquid storage section and design a small-sized reservoir at a distance of 30 cm ~ 50 cm from the inlet of the throttling mechanism It is used to digest the flash gas caused by the pressure drop accessory resistance and the height difference gravity drop of the pipeline, so as to ensure the normal operation of the downstream throttle function.

Hope this information is helpful for you to designed and installed refrigerant system piping.

How to Remove Air From Refrigeration Cooling System?

Do you have any customized Refrigeration System, We would like to supply you Free technical support. Kindly to contact Lando now.